This is what I am, a Pagan against horse slaughter, a SARMATIAN focused one at that. That means that, yes, I actually am reconstructing, as best I can, from a culture which sacrificed and ate horses. 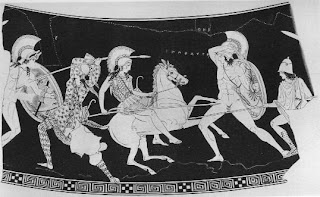 I use "Heathen" in the title for a specific reason even  though I seldom use it instead of Pagan, for it's among Norse practitioners where we seem to see people talking about "reclaiming old ways" by eating horse meat. This is NOT to say that all Heathens feel this way, but I have seen this more from Heathens than other Pagans. There are a few PIE (Proto-Indo-European) types who do as well, although from that corner there seems to be more symbolic "horse sacrifice."

And a friend recently noticed a Heathen publication, Hex Magazine issue 4, ran a horse meat article, calling again for "returning to old ways" by eating horses.  And they still have readers. It's so disgusting to me. So while many Heathens might never want to eat horse meat themselves, it seems enough are able to turn a blind eye and keep supporting a magazine which promotes horse slaughter.

Here's where I'm at. The people of the Steppes were the first horse people, they did first herd horses for food, milk, and meat. There was a true sacrament in this, a true sacrifice in the "making sacred" meaning. They traveled the Steppes with the herds, which lived as horses should, nearly wild and free-roaming. This isn't, actually, all in the past tense, there are many horse people still on the Steppes for all that other cultures have over taken those ways quite a bit. The horses and people are still as free-roaming as those other cultures give them space for. Many still eat horses. They're not Pagan any longer, but their horse probably don't know the difference. They still RESPECT the horse and all the animal has meant for their survival, some of these horses might end up eaten but they never know the hell of the slaughter chutes, the torture of the feedlots, or the horror of double-decker trailers.

I can respect their way of life. I do not live it. I do not live the life of the Pagan Sarmatians either. I do live with horses, all rescues. I live in a country where horse slaughter is done in immensely inhumane ways, horses are in terror and pain going into the chutes, they are in utter agony when they are rendered alive because the bolts do not kill horses. EVER.  We hide this from our eyes, breeders use it to get rid of excess foals, the racing industry to get rid of retired racers, many owners to get rid of "aged" (that would be four years old) retired performance horses. The latter two are all treated with 'bute, poisoning those eating them, too. These horses are not treated as sacred, they are not honored, they are not living free and half wild, they are not killed quick and humanely.

I would no more eat horses than I would own slaves. There are things we are NOT reconstructing. These are two of them. I know of no Heathens or Pagans who would suggest returning to human sacrifice, slavery, or even the sorts of class systems. We do not need to return to eating horses.

If one were, I challenge them to live as I do. With a small herd of horses who depend on you, who you care for daily, who trust you, and who seek your attention and love. Can you do it then? I actually do raise other animals for food, the difference between what my horses seek from me and what the sheep, pigs, and chickens do is tremendous. The cats want less to do with me, only the dogs out do the horses in bonding.

Many Christian horse advocates actually will note that eating horses is "heathen" or "pagan" and that Christianity should have brought an end to it and did in some parts of Europe. This is, in some places, this was true. There are currently accusations that horrible acts of violence and slaughter happening in Britain are done by "Pagans." I highly doubt that is who is doing it, rather this is just a very sick person or people. We do NOT need actual Pagans and Heathens even just talking about eating horses when the reality of what they are talking about is participating in the most horrifically cruel corporate slaughter that can be imagined.

So this Pagan, following a horse culture, does NOT eat horses, does NOT support horse slaughter, DOES spiritually honor the horses, DOES do what she can to rescue horses from both abuse and slaughter, and WILL fight an end to the slaughter of our horses. I ask other Pagans and Heathens to pledge likewise!
Posted by Lysippe Archer at 9:20 AM 4 comments: