....just about now, my father and I went to talk to a man about a horse. We had found him the day before, driving to places where my Dad knew horses were for sale and there had been several at this pasture, now there were three. Two were neglected looking but in good condition, the third was a walking skeleton. I left knowing I had to try to save that horse and, as the pasture was not located where the man lived, we went home and called him.

My father was encouraging about buying the starving gelding, I was quite sick at the time and I think he felt that saving this horse would be healing for me. When he got a closer look at the horse the next day, I know he started to have second thoughts. We had, of course, called the vet and a farrier (all three horses had horribly neglected feet...we were going to make sure all three were dealt with for that). No one said anything to me, but it was clear all three of these men realized this was a walking dead horse, there was no way to bring his weight up before he'd die without that itself killing him. Especially since he also had a heart murmer. The owner, however, was in complete denial, "he'll come right up once the grass comes in better..." The vet explained things to him, looked at me and asked again if I was going to buy this horse, I confirmed that I would, and he told the man I was keeping him out of jail. I had mixed feelings about that, really, this man should have been jailed for this, stupid is no excuse, but I also knew that if the horse was seized he'd be put down as too far gone. I needed to try.

And I did. Until his Coggins test came through and he could cross the border from VT to NH, I went several times a day to the pasture to feed him softened senior feed. His starvation was caused by horribly neglected teeth, which nothing could yet be done as he had enough strength to fight the attempt to float them and he needed more than that. And he would not survive being sedated. I'd walk him after he ate, to help him digest. He came home to us, amazingly he survived for nea

rly 6 years.... I won't tell more the details of his story as I already have here. In short, it was clear he was abused long before he suffered the neglect we found him in. It took some time to gain his trust, for him to feel safe. But he got there. Perhaps for the first time, he trusted a human and he found some peace.
What I will note here that I named him Saoradh, which means "freedom" of a redemptive sort. When I named him I didn't even realize how long things had been bad, how much redemption he needed. I didn't know that on the day I bought him and started feeding him, it was his 27th birthday. I didn't know he was the Arabian gelding a classmate had talked about having, which her parents boarded at a "trainer" we knew was incompetent at best, and possibly far, far worse. I didn't know how many hands he went through, or the kind of people they were. But I did find that out, as he was freeze marked and his registry developed an online program to look such stuff up.
I just knew he hurt, that he was suffering. And so was I. I was ill, had spent some time housebound. I hurt emotionally from the loss of Midnight and Trouble not a decade before. A loss that kept me away from horses until shortly before we moved back here about 6 months before finding Saoradh. I knew if I was going to be around horses, I had to save them, because I couldn't save those two. I had volunteered for awhile, before my health got as bad as it did, at a horse rescue. When we came here, I was looking for a horse to save. I found one.
And was saved.
We healed together, going out on slow walks around the pond, letting him stop to eat while I rested my wea 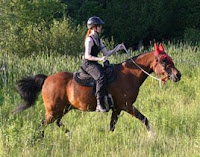 k body. We both built strength. Our timing was neatly synchronized it seems as I look back. We both started too weak to really walk far or fast and we progressed. We later learned to "dance" together, as we did Natural Horsemanship ground work to build trust. And eventually we were able to explore together, when he was secure enough as well as strong enough to accept me as a rider, I was also able to trust my body's ability to handle riding.
And I know so many stories like this, of people who saved horses only to find themselves healed too. Whether emotionally, physically or both. There is something about a horse that can touch people so deeply, to pull us out of ourselves, to give us strength. Dogs have this too, for some other animals as well, but these two creatures, I believe, horses and dogs, we have a primal, instinctual connection with.
Which is, again, why I'm against horse slaughter. Because we have this connection, they've been with us for millennium, we as a species owe so much to horses. They were both partner and tool to different people; sadly, it's often the tool that people see. They no longer are needed for work, for the most part, and so they mostly are seen as sporting equipment. And like tools and sporting equipment, horses are discarded when "useless," when they get too old to preform, when a new style comes along. Wild horses are seen as pests to be rid of, foals as nothing but money makers with profits coming from quantity over quality and those not bringing the big bucks as sporting equipment making at least something for their greedy breeders as meat. 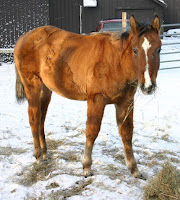 There are those who look at horses that end up like Saoradh did before I found him and proclaim that this is a reason we should have horse slaughter. But old, sick horses are not what the slaughter industry wants. No, it wants young stock, fat and healthy, like the PMU filly (on the let here) I adopted and stopped from being sent to the feedlots. They'll sometimes take fat and healthy middle age horses like Midnight and Trouble, but it's not the most desired and easy to sell. And the truth is, I have very good reason to believe that the person who sold Saoradh at the auction where the guy whose pasture I found him in owned his registration, and therefore it wasn't the freeze brand that kept the kill buyers from buying him but instead that he was too old. Because that probably, and I have good reason to believe this, that was probably the intent.

And what if he had been slaughtered? After a lifetime of abuse, of fear, of distrust, I suppose the terror and torture of the slaughterhouse would have been along the lines of how he ex

I thank Saoradh for his time with me, for healing me, for sending Saorsa to me (for I feel he did in some way). I miss my old boy.